Elise Riggs is a character from the video game series SSX (Snowboard Supercross). She has appeared in every SSX game along with Kaori Nishidake, Zoe Payne and Mac Fraser.

Elise is a blonde and beautiful Canadian snowboarding 'Amazon' who is as happy carving out a man's heart as she is carving a turn in the SSX World Circuit or the surf of Australia's Gold Coast. Nothing about Elise is accidental: she chooses her look, her moods, her friends, and her enemies. She is used to getting her way, and will use whatever it takes to get what she wants: her strength, her skills or her looks. Elise likes the rough stuff in the heat of SSX competition, and she hates losing. Just being passed by another rider gets to her competitive spirit. She will use her sharp and deadly humor to cut someone down to size, and a laugh that will chill you like a winter's day of surfing in Tofino.

What is your favorite course?

What is your favorite trick and why?

Holy cow! That sounds incredible. So, if you didn't snowboard, what would you be doing?

Have you made any friends on the tour? Enemies?

What is your greatest strength? Weakness?

Wow. OK, tell us about your worst wipeout/injury.

Are you keeping it real? Tell us how...

What do you do when you're not snowboarding?

Elise has always been a force to be reckoned with. She built up a winning reputation with a mix of savvy business sense and impressive focus. Explosive happiness brought on by big wave surfing or fresh powder riding shows the kink in an often titanium personality. Her passion for the outdoors and love for the thrill is rarely matched. This season Elise is evolving. With no sign of relinquishing her hard fought success within SSX, Elise has set her sights on improving her riding.

Super modeling and building a business empire by day, shredding up the mountain and breaking records at night are all in a day's work for this SSX veteran... talk about beauty and the beast... she's both!

A born self promoter, when she's out of the media's eye she gets restless. With a steady bubbling of aggression under the surface, Elise has been known to go 'on a tear' when the circuit is done.

Seeking an endless stream of challenges to keep things fresh, Elise has tried her hand at launching her own 'Amazon-type' clothing line, starring in a few films (B Horror, Sexy Female Commando), dating and chewing up a long list of A list celebrity suitors, and showing a complete lack of restraint when it comes to getting into trouble.

Ambitious, driven - if she's not fighting for gold on the SSX circuit she's tearing the place apart due to boredom. With skiing debuting on the circuit this year - Elise sees an opportunity to reinvent herself - and add another series of wins to her career.

Gave up everything and moved to Mexico to sell shell necklaces. Turned business into multi-billion dollar Jewelry empire. Bought Canada from Tyson - turned it into a llama farm.

Even though she left The Tour, Elise refuses to leave snowboarding behind, much to the chagrin of her agent and insurers she still gets out to shred between film shoots and convention appearances. Elise has found a perfect balance in her life between acting and riding and she’s never been more content. Always searching for the next rush, Elise has recently been consumed by a new obsession: base-jumping with a wing-suit. Contour flying down a mountainside at 150 km per hour delivers a rush unmatched by anything she could do on a snowboard alone and quickly Elise realizes that she has to find a way to marry the two.

Elise Riggs (cover girl of SSX) has made her way back into the SSX world after taking a break from snowboarding and pursuing other goals.

Eddie is a friend of hers, though it's unknown how they became close. She's one of the few that can tolerate his immature behavior. Although Eddie didn't make a proper appearance in SSX 3, Elise's profile for that game mentions him as a friend.

JP is a current friend of Elise. It's possible that she used to date him, or still is. Both have similar personalities, but Elise is slightly less narcissistic than JP. She's one of the few friends that he has.

Marisol is one of Elise's rivals, though it was never explained how they started to hate each other. Both are sexy and sultry, often fighting over who's hotter. She didn't make a proper appearance in SSX 3, but Elise's profile for that game lists Marisol as her victim. Elise's taunts to her include calling her chicken legs and calling her clothes cheap. Marisol responds with insults in Spanish.

It was never stated in Elise's profile, but Allegra has her as her victim on her SSX 3 profile. This is mostly because Allegra is a tomboy, and can't stand idealistic beauty.

Though never stated in either of their profiles, it seems that Zoe, like Allegra, can't stand Elise's stuck-up and pseudo-narcissistic personality, while Elise can't stand Zoe's anti-conformist personality.

Elise as an unlockable character in NBA Jam: On Fire Edition seen in the trailer. 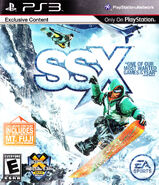 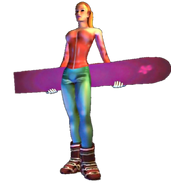 Elise: Eutiful! Oh I Am Perfect! You must be Telling me if you Love Me! I Love Elise Because She is the Best Character of All Time!

Elise II has the AEYOH!

Community content is available under CC-BY-SA unless otherwise noted.
Advertisement